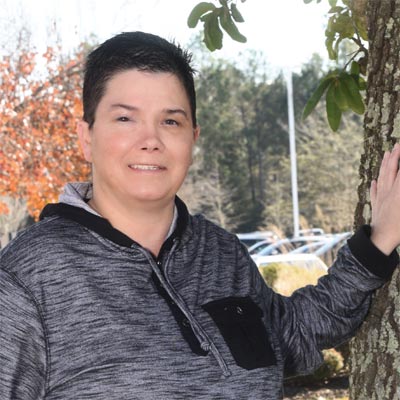 by Stacey Paretti Rase | Reprinted courtesy of Inside Northside Magazine

Just over two years ago, April Picou was a happy, healthy 40-year-old who enjoyed a vibrant life and worked offshore for a catering company. But all that changed one day when she began having chest pains at work and was taken to a hospital close by. While there, she underwent an angiogram —a diagnostic tool used to uncover heart and blood vessel conditions. April’s heart turned out to be fine, and her symptoms resolved. But within three weeks of the procedure she began having horrible pain in her right leg.

“My primary care doctor ordered an ultrasound to see what could be wrong. I remember the tech stopping in the middle of the procedure to rush to get the doctor,” April says. The ultrasound showed a major blood clot that had settled in April’s hip following the angiogram. The complication is very rare but is a known potential risk of the procedure.

Over the next two years, April underwent multiple procedures to clear the blockages, including three femoral bypasses. But the clots kept returning, as did the horrific leg pain that came with them. The procedures eventually made things worse and caused blockages all the way down to April’s lower leg. She couldn’t sleep or stand and was eventually wheelchair bound as walking was impossible. She lost her job and had virtually given up hope of having a normal life again. With seemingly no other options, April decided that amputation of her leg was her only choice.

Prior to the surgery, April was told to get clearance from a cardiologist and was referred to Dr. Frank Arena, lead physician at the Cardiac Vascular and Vein Center at Lakeview Regional Medical Center in Covington. April says everything changed during that appointment.

“Dr. Arena told me he thought he could save my leg with an angioplasty. At first, I told him ‘no’ because by that time I already had my mind set on the amputation. I had a second opinion that agreed I should amputate. I didn’t want to get my hopes up—I hadn’t walked in two years when I met Dr. Arena,” says April. “But he convinced me to try. He told me not to give up, and that if I was willing to fight, he would fight with me. After he walked out of the room, I cried. I said to myself, ‘This has got to be my chance.’”

The procedure Dr. Arena suggested would attempt to open blockages in April’s damaged blood vessels to restore better blood flow. Dr. Arena compares the vessels in the leg to an interstate system—most of the exits on April’s interstate were closed. Not having blood flow was causing her leg to die, and restoring flow was not going to be easy. He had to study April’s case and the notes. Northside from her past procedures extensively to determine how her native anatomy had been reworked.

“All we were left to work with really were grafts,” explains Dr. Arena. “We just had to make what we were left with work.” The angioplasty, which coincidentally was performed on the same date that April’s leg amputation surgery was scheduled, was successful. After a few months of rehabilitation, April was walking and enjoying life again. She now works six hours at a time on her feet cooking in her daughter’s café and enjoys playing with her grandchildren. Her last ultrasound showed good flow in her leg, as well as positive signs that her remaining native anatomy has maintained since the procedure. April may need a follow up angioplasty every five years or so to maintain good blood flow, but Dr. Arena is optimistic about her prognosis.

Dr. Arena says that an angiogram is a common procedure that diagnoses real problems and can lead to lives being saved, but he stresses that all procedures come with risks. He encourages all patients who undergo an angiogram to recognize the signs and symptoms of blood clots and know where to go to treat them. Most important is choosing a doctor who uses an experienced team in the catheterization lab, who will listen closely to patient concerns and who will pay attention to details.

April knows how lucky she is to have found a doctor as passionately aggressive as Dr. Arena. She credits him with not just saving her leg, but giving her back a normal life. “I thank God every day for him,” she says. “He’s my angel!”